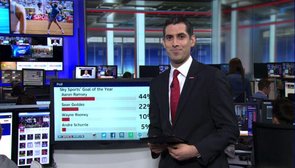 For all the latest action please visit TheWCFCTV Channel

WCFCTV first came onto the scene back in 2008/2009 filming interviews and news throughout the Club and shown on the TV screens in the bar at St Georges Lane.

As our time at St Georges Lane was coming to a close, in 2011/12 it became apparent that there was not a great deal of film showing action from City games, so WCFCTV started to cover games which were shown on our new Youtube Channel - Any previous footage from games recorded by fans, other teams & a small selection of games filmed by the club also feature on our channel at: WCFCTV.

We endeavoured to film as much of the club as possible including behind the scenes and we covered 45 games during the 2012/13 Season including the final ever league game at The Lane v Chester.

Filming the games has led to a lot of publicity for the Club and Players including probably our finest moment with the now famous Sean Geddes "Rabona"which became a global sensation. The goal saw Geddes winning Runner-Up in a Sky Sports Goal of The Year award for 2014 (pictured above) and latterly the same goal was awarded Non League Goal of The Season for 2014/15. We didn't make it onto the shortlist for FIFA Puskas Award for 2015 but the very fact that we were in with a chance was great for the Club!

A few Rabona stats: The Sean Geddes' "Rabona" goal in our FA Trophy game at Home to Barrow, went viral and has been seen millions of times across various media around the World.

The Geddes Rabona was shared with TV Companies around the World as well as Sky Sports (as mentioned above) and even on Match of The Day! If you haven't yet seen it, you can watch it here on WCFCTV

Once again Worcester City have made World sporting headlines!

This time it was a team member of the opposition - Ricky Drury - who was centre stage. With City leading 0-1 in the fourth minute of added time at Holbeach United in the FA Cup, Goalkeeper Drury went up and scored an overhead kick from the edge of the box. Within an hour of going on line the goal had been seen 12,000 times! By the 1pm Sunday it reached 100,000 views and by Monday afternoon, less then 48 hours later - 500,000 views!

The Holbeach goal is featured on the websites of:

BBC Sport
The Daily Mirror
The Guardian
The Independent
The Telegraph
ESPN
The Sport Bible
and a host of others from around the World.

Great publicity not just for the Club but for WCFCTV Sponsors at the time: Ron Sims, Xerox (UK) Ltd and Arrange My Group and of course the club main sponsor M Pinches Transport

In the period 26th September to 12th November we had 1,000,511 individual views on our youtube channel. During that period Sean Geddes was announced as Hereford & Worcester Sports Personality of The Year and The Best of Sean Geddes was shown at the awards Presentation Night held at The Sixways Stadium, Worcester.

Our Club Film about the FA Cup run in 2014/15, "The Steps of a Giantkiller" was shown at The Worcestershire Film Festival to a full house at The Worcester Arts Workshop on the eve of our FA Cup 1st Round game at Sheffield United.

WCFCTV has been viewed in 221 Countries and Dependencies around the World, from Aruba to Armenia, from Laos to Lesotho and from Vanuatu to Vietnam.

In 2015 at a WCFC Photo Exhibition at The Guildhall in Worcester, we were handed a box containing a reel of cine film. The Lettering on the box stated games from 1950's Worcester City v Liverpool & Sheffield United. After getting the film converted to digital, we found footage from the 1957 FA Cup game v Aldershot which included the Fans Special Steam Train to the game; The FA Cup games in 58/59 v Brierley Hill, Millwall, Liverpool and Sheffield United as well as the 1960 FA Cup game v Coventry City - This film is the earliest we have found and was filmed by the late Ron Edgeworth of Rainbow Hill in Worcester.

This film has been added to our archives which includes other games filmed in the 2000's and other footage we have found via various sources.

If you have any boxes stuck away in your attic with, "Worcester City Film" written on it, we would love to see it & give it a new home!!

Due to the restrictions in place during the COVID19 situation, the rules prohibiting games being filmed live were lifted enabling us to Live Stream all of our Home games - We used the MyCujoo Platform, allowing all supporters not able to get in to the games to keep involved. The restrictions in place had a massive impact on the clubs finances so if you have watched any of the Live Stream matches (or highlights in general) and would like to make a donation, please do so in the WCFC Online Shop - every penny makes a difference.

Our Live Stream can be found at: WCFC LIVESTREAM

Since a filming tower was added to Claines Lane two months into the 2021/22 season we have been able to Live Stream every home game into the Club Bar & also for non Saturday 3pm games we have made the stream available to watch at home. We are gradually improving our Match Day Live Coverage with every game which now includes match highlights at half time & full time in the bar.

If you have an interest in anything to do with Filming games or production especially "Live" production, looking to gain experience or if you would like to help run WCFCTV please CONTACT WCFCTV we would love to have you on board.

Donations to the club can be made at: WCFCTV DONATIONS - Thank you to all of the people who have already made donation.