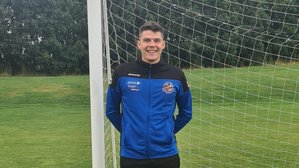 "Keeper to make debut vs Kidderminster"

We are delighted to announce that we have agreed a deal to sign goalkeeper, Brendon Bunn ahead of the new season.

Bunn is previously of Bromsgrove Sporting and Halesowen Town and played his part in the latter's great run in the FA Trophy.

On securing a new number 1, Tim Harris said "To be in a position to sign a replacement as good as Brendon so quickly after the departure of Dan Jezeph is very fortunate for everyone connected to the Club. I have personally watched Brendon perform admirably for Halesowen, he has a presence, is a good goalkeeper that has played at a higher level. He also knows several of the squad which will help him settle in quickly, he is cheerful character so I am positive it will not take him long and would like to officially welcome him to club."

Brendon, is due to make his debut in our last pre season home friendly against Kidderminster Harriers tomorrow evening, kick off 7.45pm.

A warm welcome to The Faithful to Brendon.