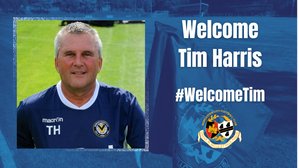 In a vastly experienced managerial career, Tim has taken posts at the likes of Newport County, Gloucester City, Hereford, Forest Green Rovers, Merthyr Tydfil and brief spells with Tamworth, and Redditch United in a variety of roles.

Tim began as Manager at Cinderford Town in the 90’s where he secured the Hellenic League Division One Title, The Hellenic Premier Division and two league cups. At Cinderford he also had a memorable FA Cup run to the 2nd Round proper.

Tim then moved onto Newport County where he was in charge until 2002. In this time, the Exiles won promotion to the Southern League Premier Division and drew with Blackpool at Bloomfield Road in another excellent FA Cup run. Tim had an additional spell at Newport County between 2008 and 2013 as Director of Football, where they had two promotions, two Wembley appearances and a return to the Football League after an absence of 25 years. He has held similar roles at Tamworth, and Hereford more recently.

City fans will know Tim best from his time as Manager – General Manager of neighbours Gloucester City. Tim spent two periods with the Club, initially 2005-2008 where they secured promotion as Southern League Play-off winners. He then returned 2013-2017 where he continually kept Gloucester in the National League North whilst the club were in exile.

After a playing career starting at Shrewsbury Town Youth, Tim went on to play for Newport County Youth and Reserves, before signing with Gloucester City in 1980. He joined Cheltenham Town 1981/82 season and had two loan spells and won the Southern League Championship in 1984/85 season and were Runners–Up in the League Cup final.

On accepting the position, new Worcester City Manager Tim Harris said “Worcester City FC is a great fit for me. It goes without saying that this football club has a rich history and strong fan base, the board have managed expectations well and have got it into a good position to kick on now. The timing for me was perfect, the fact Worcester City hasn’t had a promotion for 40 years needs to change, and I’ll be working with the board towards that aim. I can’t wait to get going and the sooner football returns the better.”

Speaking on the appointment, Chairman Steve Goode said “We are really pleased to have secured Tim’s services as Manager. His CV speaks for itself whilst his approach and values are very much in chime with our ambitions and methodology as a football club. He ticks every box for us. We can’t wait for Tim to settle in and get going.”

Tim will finalise his coaching staff in due course. Football Secretary Kev Preece, Kit Man Jed Hallam and Physio Shannon Kincade will continue in their positions.

We would like to sincerely thank Craig Jones for his efforts in stepping up as Interim Manager.