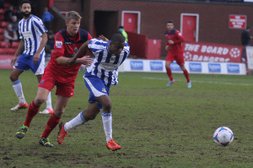 City head north for next challenge

Buoyed on by two straight victories City make the journey full of confidence but face a tough task against the free scoring Robins who recorded two 5-0 victories over Stalybridge during the new year period as well as a 5-4 defeat at Gainsborough in their last outing on the 7th January with two games postponed since then which included Saturdays scheduled trip to Oxford City (which was to be refereed by Worcester's Neal Radford).

After Saturdays 2-1 win over Colwyn Bay Carl Heeley was quick to state that he would have no problem moving players around due to the intense schedule that City face over the next two weeks. He said, "With 5 games in a two week period it will be a tough ask, so we will need the whole squad to be firing on all cylinders as they have done for the last two games".

The sides last met on the opening day of the season which the Robins won 3-1 at Aggborough.

There will be live commentary with BBC Hereford & Worcester with updates via Twitter and the Pitchero App, updates will also appear on the website via the match centre.