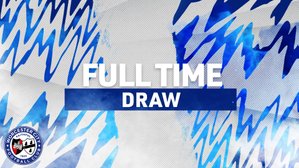 Ends even at The Trico Stadium

City wrapped up their pre-season schedule with a draw this afternoon away at higher-ranked Redditch United.

Both goals came in the first half, both in the same manner. Redditch opened the scoring in the 11th minute when Louis Hudson's effort hit the post, bouncing out and hitting City's Trialist goalkeeper before rolling in.

Sean Brain then cannoned a 25yard effort off the post, which bounced out hitting the Redditch goalkeeper in the back, before rolling over the line to tie things up just before half time.

In true pre-season style, the second half saw a string of changes, but was played out at a high tempo, seeing a number of chances for both sides. Neither side managed to convert and the tie ended up all square.

City kick off the 2022-23 season proper next weekend with a short trip to Malvern Town in the Emirates FA Cup - 6th Aug, 3pm.