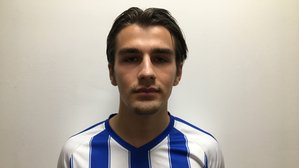 GET TO KNOW - BAILEY FULLER

"Learn more about our recent signing"

Last week we caught up with recent signing, Bailey Fuller to see how life has started at the Club.

You've now been at the Club for a week and have your first appearances under your belt, how have you settled in with the lads ?

It’s been a great week and start to my time here. The lads couldn’t have been better, already feel settled and part of the team.

You had a really impressive debut against Stone Old, scoring your first City goal and you even came close with one being cleared off the line. Have to be happy with that performance ?

It was a great start for me, mainly for the convincing win and linking up with my teammates for the first time, and it going so well in the process. Looked at some improvements from myself for the future but overall a great start to life at City.

Any indication on your personal targets for the season ? Have you a certain amount of goals you are aiming for or do you very much keep these targets to yourself ?

Yeah its all very stats based but I also like to review my performances on a game by game basis and look at improving any weaknesses of mine that I see.

Being a local lad, do any family members support City and will they be following you home and away this season ?

My Dad and Grandad have always supported me, but I am sure moving to the City has a special meaning to them as my grandad tells me he played for the City many years ago.

And just a little bit about yourself ....

Which footballer(s) did you look upto growing up ?

Has to be Cristiano Ronaldo and Eden Hazard

Which team, (apart from City of course), do you support?

We will be bringing further catchups with recent signings Dimitri Dunkley and Adam Harrison very soon.