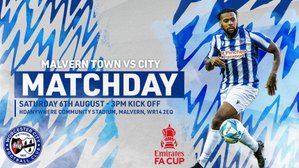 Going Up The Hills For The Cup - Preview

City make the short trip to the HDanywhere Stadium tomorrow, kicking off the 2022-23 season in FA Cup action against Malvern Town.

Concessions and juniors are pay on the gate.

City head in to the tie off the back of a very strong pre-season, which saw the side battle it's way through a number of tough games against higher ranked opponents, more than holding their own throughout.

The hosts, Malvern Town kicked off their season in midweek with a draw against Hereford side Westfields in Hellenic League action.

It's been a number of years since the sides last met in FA Cup action, back in 1980. The tie went to a replay, where City ran out 2-0 winners at St George's Lane.

Speaking ahead of the tie, Manager Tim Harris said "The lads have put a tremendous amount of effort and commitment into our pre season schedule and are really looking forward to the coming challenges, especially tomorrow when we travel to Malvern Town in the Emirates FA Cup.

"All clubs up and down the country will be hoping of a good cup run, and whilst we are no exception, we expect a real tough encounter in this local derby and will have to be at our best to get over this first hurdle.