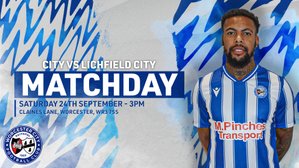 By Lee Jackson
1 day ago
Share via
FacebookTwitter
https://www.worcestercityfc.or

Tomorrow see's The Blue And Whites kick off their 2022-23 FA Vase campaign as they welcome Lichfield City to Claines Lane for a 3pm kick off.

It's the first meeting of the two Midland Football League sides this season, and it looks set to be an exciting game. When City last welcomed Lichfield to Claines Lane back in December, The Blue and Whites ran out 2-1 winners, with goals from Billy Shaw and James Douglas.

Lichfield City come into the game tomorrow in red hot form. Their start to the season has only seen 1 defeat in 10 games, with that defeat coming at the hands of Boston United in the FA Cup. Contributing to their red hot form, joint-top goalscorers Sam Fitzgerald and Ethan Muckley have both bagged 6 goals each.

Following last Saturday's 2-0 victory at home to Whitchurch Alport in the league, The Blue And Whites suffered a setback with defeat to local neighbours Stourport Swifts on Tuesday evening at Claines Lane. This weekend's tie sees the focus turn away from the league, but looks set to be an exciting encounter against a dynamic and in-form Lichfield City side.

Tickets for tomorrow's game are available on the gate with both cash and card accepted.