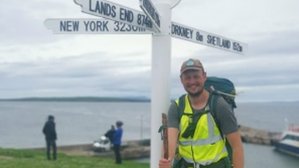 Our Pies Are The Best

At our home game against Haughmond back in April, we welcomed Dutch
groundhopper Gijs van de Poel to Claines Lane.

Gijs was undertaking a mammoth walk from Land’s End to John O’Groats in
support of Street Soccer Scotland. Accompanied by his brother Joris, Gijs planned
his route so that he could visit a number of sports venues, with an aim to engage
with different supporters’ groups en route.

His adventure concluded in June with a charity football match in John O’Groats.
Gijs is now back home and has started writing a book to record his memorable
experiences. He messaged us and told us:

“I'm picking an aspect of British football culture and linking it to the clubs or
matches I attended. For Worcester, I'll talk about the food that we had, as it was
the absolute best on the whole trip.”

High praise indeed, and an honour both for Worcester City FC and our pie
suppliers Narraways. We may be biased, but we think they’re pretty special too.

The book, Stiles & Turnstiles, will discuss the pilgrimage from Land's End to John
O' Groats, while diving into the uniqueness of British football culture. It will be
published in Dutch at the beginning of 2023 and Gijs will be looking for
publication possibilities in the UK as well. It'll discuss 40 football matches visited
as well as the 7 National Trails walked, including random encounters, acts of
kindness, moments that almost got Gijs killed as well as the foreigner perspective
on the quirkiness that he says makes Britain unique.