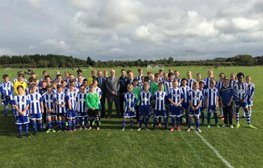 The Perdiswell sports pitches are back up and running after their official opening following a £330,000 Worcester City Council investment. (Worcester News Article)

Five new full-sized football and one rugby pitch have been created on council-owned land by Perdiswell Leisure Centre to resolve previous drainage problems.

Changing rooms adjacent to the pitches are also being refurbished.

Worcester City youth teams from under 10s through to 17s are holding Saturday morning games on the pitches.

On weekdays the ground will be used for PE lessons by the nearby Tudor Grange Academy and Heart of Worcestershire College.

It is anticipated league football matches may also be played on the pitches on Sundays in the near future.

“Ensuring there are high-quality sports facilities in local communities across Worcester is a real priority for the council,” said Worcester mayor Steve Mackay who officially opened the pitches.

“I hope these new pitches will give local people hours of enjoyment as well as exercise in the future.”

The work has been paid for by Section 106 funding which is money developers give to councils to improve community facilities as part of planning agreements.

A spokesman for City FC said: "Special thanks to Worcester City Council, the Worcestershire Football Association and Phil Day Sports along with Richard Savory for project management of the overall site and the works in conjunction with Mark Wilcox (former club director) over the past 12 months to get the pitches ready for the start of the season."