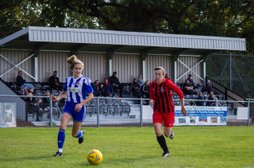 STOURBRIDGE NEXT IN THE VITALITY WOMENS FA CUP

Another home tie awaits Worcester City in the 2nd Round Qualifying of the Vitality Women's FA Cup after a 4-1 victory over Droitwich Spa Ladies watched by a crowd of 220 at Claines Lane.

The prolific Beth Taylor grabbed a hat-trick but goal of the game went to Olivia Ashfield, whose spectacular 25-yarder put her side 2-0 up on the hour. Up next this Sunday are Stourbridge Ladies with a 2pm Kick Off. Due to the current Covid situation there will be a maximum crowd of 300, so the match will be all ticket. Tickets are available from the WCFC Online Store at: CITY V STOURBRIDGE LADIES - Adults: £3, Juniors Under 16: £1.50

Photos from the Droitwich match were kindly supplied by Flora Martyr. The Preston-based photographer, who grew up in Worcester, took pictures at the game as part of her 'Road to Wembley' project.

As the women's first team extended their cup run to four matches, it was a winning weekend across the board for all of City's female teams that were in action.

The Under 23s chalked up a 2-1 victory at Inkberrow Eagles courtesy of strikes from Olivia Taylor and Sydney Harris, whilst the Under 17s maintained their unbeaten run after recovering from going a goal behind at Warndon Wildcats as Liv Wood, Leah Ritson and Laura Shanley found the target.

And the Under 12 Lionesses were also in good form as they defeated Nunnery Wood Kestrels 5-1 with Maisie Jackson scoring four and Thea Richmond also notching.

In the Midland Football League, the Reserves conceded two first-half goals to Stratford. Owen Oxley pulled a goal back after the break but it wasn't enough to prevent a first defeat of the season.

Oxford City were the opponents for six age groups in the Nerf Junior Premier League with the younger sides making up for their older counterparts in front of goal. The Under 11s, 12s and 13s scored 19 between them as the Under 14s, 15s and 16s all drew blanks in defeat.

Rafe Green (2), Jayden Bennett, Henry Guy, Ashton Doyle, Jake Brookes and Hayden Russell netted for the Under 13s in a 7-0 win. In a closer game, the Under 12s also hit seven as they triumphed 7-5 thanks to Damian Duncan (4), Harley Arnold, Louie McLean and Oscar Houston-Hanbury.

In other fixtures, the Under 10s and Under 9s continued their development with matches against Droitwich Spa Crusaders and Birmingham City Girls Under 10s respectively.