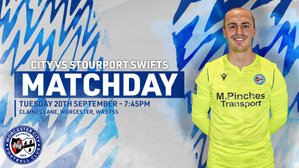 By Lee Jackson
4 days ago
Share via
FacebookTwitter
https://www.worcestercityfc.or

Near neighbours, Stourport Swifts are the visitors to Claines Lane this evening for a 7:45pm kick off in Midland Football League action.

Following Saturday's 2-0 home win against Whitchurch Alport, The Blue And Whites will be looking to continue moving upwards in the league standings, but face a tough challenge against a well organised and strong Stourport Swifts side.

Swifts have got their season off to a good start, which sees them currently sit 7th in the standings, having picked up 10 points from their first 6 league games. The 3 points on Saturday for City saw them move clear of the relegation zone and in to 18th, on 4 points. A win tonight could see the Blue And Whites move as high as 12th, depending on other results.

A number of ex-City players are amongst the Swifts' ranks, and are expected to feature this evening, including Ben Tilbury, Mark Danks, Aaron Birch and Connor Gater.

Players to look out for for the visitors include Johnny Johnstone, a tricky pacy winger, who caused Market Drayton a raft of problems, including an assist his last time out. Ben Tilbury, who all City fans will know, picked up a brace in Saturday's tie, being deployed in a role further up the pitch. And at the back, Ben Jevons is a no-nonsense central defender - Powerful in the air and strong.

The Blue And Whites came through Saturday's victory unscathed, and head in to tonight's fixture with no new injury concerns, with those currently sidelined progressing well in their rehabilitation.

Following two starts for the club versus Market Drayton and Darlaston, left-back Lucas Powell has opted to move on. We wish him all of the best in the future.

Speaking ahead of the game, Interim Co-Manager Stewart Watkins said, "It was tremendous to see The Faithful out in their numbers on Saturday in the sunshine. We were delighted to give you goals and three points to celebrate.

"We all really appreciate your continued loyalty and will try our very best to deliver again for you tonight.

"Thank you from myself and the team."