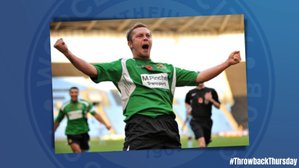 "His name will stay a permanent fixture in the club's history books."

Nobody has made a greater impact at Worcester City in recent times than midfielder Sean Geddes. Signed from Stourbridge in September 2014, he scored on his debut against Lowestoft Town in a stormy encounter that saw both sides finish with 10 men. Within the space of three months, he had written his name into Worcester City folklore with two goals against Coventry City at The Ricoh Arena in the FA Cup first round and the equaliser in the replay against Scunthorpe United at Aggborough in round two. Sandwiched in-between was his "Rabona" against Barrow in the FA Trophy. The goal shot Sean to international fame - it has been viewed millions of times around the world and it won him the Non-League Paper's goal of the season award as well as runner-up in Sky Sports viewers' goal of the year.

Born in Sandwell on 13 January 1992, Sean spent time with Manchester United as a trainee, then moved onto Walsall before joining Stourbridge in July 2011 after a spell on loan at Redditch United. He finished the 2011/12 season as the Glassboys’ top goalscorer with 18 goals and was named player of the year. He followed this up with a further 17 goals in 2012/13. He played in the side that beat Plymouth Argyle 2-0 in the FA Cup first round in November 2011 – a good omen for what was to happen next. He proved that he was more than capable of making the step up to the Conference North, scoring 17 goals for City in his first season. There was talk of Sean moving back to full-time football, but nothing came of it.

In his second season, he played 22 times, scoring just 4 goals, but was evident that he was struggling to replicate his previous form. His fiery nature also got the better of him on several occasions – he received a red card twice in the first three months of the 2015/16 season and his second, for comments made to the referee against Nuneaton Town in October, led to him missing the FA Cup first round tie against Sheffield United.

Sean did not feature for City for several weeks after serving his four-game ban due to illness. There were rumours that players would be offloaded to make budget savings, but it was still a shock when in December 2015 Sean re-signed for Stourbridge for a nominal four-figure transfer fee, plus a 15% sell-on clause should he move again. Stourbridge had approached City about his availability several weeks earlier and, after lengthy discussions, it was decided a transfer deal would be best for all parties.

Despite this, Sean was back with City in the summer of 2016, promising he was fitter and stronger. He said he owed his decision to return to the support he had received from the City fans. His return was brief, as with just over a week to go before the season got underway, he was released. He signed for Hednesford, then moved swiftly onto Stafford Rangers and Sutton Coldfield Town.

In January 2017, he made a final one-off first team appearance for City, coming on as a late substitute against Bradford P.A. The story didn’t end there however as Sean was invited to rejoin us for pre-season in 2018, but he was struggling with a knee injury and he never played. Instead, he moved onto Market Drayton Town, Quorn, Dudley Town and Hinckley. He played for Quorn against City at the Victoria Ground in September 2018.

After gaining his UEFA B qualification, summer 2019 saw Sean join Evesham United as player-coach, following his old manager Carl Abbott from Quorn. He then went into management months later when he took charge at Black Country Rangers before moving onto manage Midland Football League Division One club Cradley Town. However, he confirmed via Twitter that he had left his role as player-manager there in August 2021.

Sean Geddes gave the club back some pride during the period in exile. All those special moments happened in the space of just six weeks in 2014 and few players have made such an impact in so short a period of time. These words from ex-manager Carl Heeley say it all: “He gave us all some of the best memories in modern times, something we will never forget and I am sure his name will stay a permanent fixture in the club's history books."