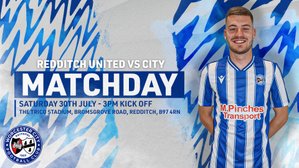 Up Next: A Trip To Redditch

City wrap up their pre-season schedule with a trip to Redditch United on Saturday. Coming off the back of Saturday's 1-6 away win at Goytre AFC and Tuesday's tough 2-2 draw against Nuneaton Borough. Saturday looks set to be another tough battle for The Blue And Whites.

Redditch United, like Nuneaton Borough play in the Southern League Premier Central - Step 3 of the non-league pyramid. Tim Harris' side will once again look to challenge themselves against higher-ranked opposition.

It's been a strong pre-season for City, with 3 wins, 2 draws and just 1 defeat, and they will look to close it out with another victory.