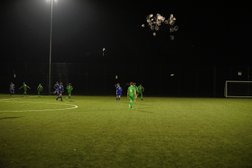 Fireworks at the Dell (literally) leaves honours even

First half
Worcester started really strongly with good passing football and came close to opening the score numerous times. Bromsgrove played a much more direct style of play, trying to get their quick attackers on the end of long balls, but Worcester’s defence were solid and weren’t troubled.

Although Worcester were on top, they couldn’t find the net and the half ended 0-0.

Second half
Worcester picked up where they left off and began really piling on the pressure. It was Bromsgrove however who took the lead following a long punt up the pitch which found one of their strikers. Ben made a great save from the strikers initial effort however a second Bromsgrove player was on hand to finish the rebound. 0-1.

Worcester were now really pressing for a goal and were all over Bromsgrove for the last 20 mins. They finally got what they deserved when Tristan Webby brought the ball down in the area and set Cam Monteith, who finished smartly past the on-rushing keeper. 1-1.

Worcester kept up the pressure for the last few mins but couldn’t find the winner. The game ended 1-1.

Worcester were unlucky to not get the win, but they showed good character to score late on.

Good luck to Bromsgrove for the rest of the season.