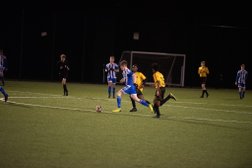 Dominant City U18s give the 'Church 6 of the best

Through to the Semi-Final!

Worcester welcomed Alvechurch to the Dell Stadium in the quarter final of the Worcestershire FA Midweek U18 Cup.

First Half
Worcester started brightly and quickly took the lead when Josh Schuck slid in Owen Oxley, who calmly slotted the ball past the keeper. 1-0. The hosts quickly doubled their lead when Matty PR slipped through Kane Harold who found the net with a tidy finish. 2.0.

Despite not being completely in their rhythm, Worcester furthered their lead when the ball fell to Kane Harold, who grabbed his second of the game with a lovely volley into bottom corner. 3-0.

Second Half
Worcester went up another level in the second half and began to really dominate the play. They added a fourth when Tom Griffin slid a great ball across to Tristan Webby who finished calmly to make it 4-0.

Tristan then grabbed his second goal when he lobbed the ball over the keeper following a great Matty PR through ball. 5-0.
The game opened up a bit in the last 10 minutes as both teams became tired, and Alvechurch managed to get 1 goal back. 5-1.

Tristan then completed his hat trick when he latched onto a Kane Harold through ball and drove the ball into the bottom corner. 6-1.
And that's how it ended.

A dominant performance from Worcester who were solid defensively throughout, and were clinical in front of goal.
Onto the semi final!

Good luck to Alvechurch for the rest of the season.