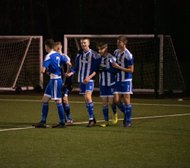 Worcester faced off against a very decent Hereford squad on a chilly Monday night at the Dell Stadium. The hosts had regained their form in the midweek fixtures so they were hunting for 3 more points.

First Half
The game started quickly, with both teams playing fast, flowing football. The visitors snatched an early following good wing play and a tidy finish. 0-1.

Worcester didn’t drop their heads and were soon back in the game when a lovely Owen Oxley ball was met by Harry Fletcher who finished superbly into the roof of the net. 1-1.

Worcester now had the wind in their sails and from the restart were pressing for another goal, and it came fairly quickly afterwards. Tom Mills latched onto a Tristan Webby through ball and smashed the ball into the back of the net. 2-1.

Worcester assumed dominance after the goal and had Hereford chasing the ball as they knocked it round very stylishly. However, Hereford showed their fighting spirit as they managed to claw a goal back against the run of play. 2-2.

The rest of the half played out fairly evenly.

Second Half
Worcester took control from the off and quickly regained their lead when Tom Mills carried the ball well and found the back of the net with a tidy finish for his second of the game. 3-2.

The game was fairly even from then on with both teams creating chances. In the last 10 mins Hereford dug deep and started putting more pressure on the Worcester goal. However Worcester’s defence held firm and the game finished 3-2.

It was a very competitive game played by two very talented sides.

We wish Hereford good luck for the rest of the season.