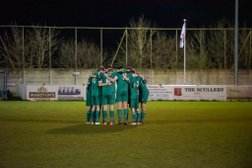 League loss away to Stratford Town

It was a very cold night as we arrived in Stratford Upon Avon for a Midlands Floodlit Youth League match, having played the previous Saturday, and Monday, nursing injuries and with squad members missing. It was always going to be a test for the young U18 squad.

First Half
The hosts started the brighter moving the ball around the damp grass pitch, keeping possession. City couldn't find a way into the game. Town were rewarded with a goal early on. City worked hard to get some momentum going, and finally it paid off when a Tristan Webby corner fell into the path of Matty Patrick-Rivers who absolutely drilled the ball into the net from the edge of the area. 1-1.

As the vistors found their grip on the match Stratford against the run of play scored a goal to go into the break 2-1.

Second Half
The packed fixture timetable took its toll. City looked weary almost from the whistle. It was no suprise when Stratford ratched up the agony by scoring their third. And with that our heads dropped, Stratford took advantage and kept the vistors pegged in their half, eventually finishing off the game 4-1. FT.

Fair play, Stratford played well and deserved the three points. City U18s were defiant to the end working hard, but heavy legs couldn't keep up with the pace throughout the game. Good luck to Stratford, see them soon in the return fixture.