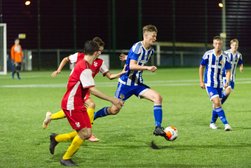 The Midland Floodlit Youth League got underway at Claines last night when Kidderminster Harriers, our local rivals, paid a visit. After a sunny day, the evening was warm and clear.

From the kick off, the two teams were evenly balanced, both looking to play the ball on the ground and keep possession. Midfield clashes defined the opening 30 minutes as teams looked for a way to get control of the match. But gradually City began to keep the ball longer and seemed to pose a greater threat. It was a great ball from Kane Harold to Owen Oxley that opened up the visitors' defence, Owen took on the final defenders and slotted it home past the diving keeper. 1-0. HT

The second half continued with the frenetic pace of the first half. The visitors to their credit, battled back and put pressure on our defence, but Ben Clay in goal and the back line as a whole were very impressive in keeping them at bay. The second goal came from an Owen Oxley/Kane Harold combination again. This time Owen put Kane through who calmly slotted the ball into the bottom left corner to effectively seal the match. And that's how it ended 2-0.

Great all round performances from two exciting teams. A real spectacle for the Covid-limited spectators. We wish Kiddy all the best and look forward to seeing them on the return game.