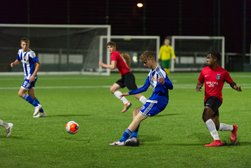 To get to the FA Youth Cup 3rd Round Qualifying match against Rugby Town Academy , City U18s had played three rounds already, beating Lichfield City 4-1 (in the preliminary) , Stratford Town 2-0 and Stafford Rangers 3-0 (in the 1st and 2nd Round Qualifying respectively). They were looking to reach the FA Youth Cup 1st Round Proper for the first time since 2013 when the City U18s made it through to the 2nd Round before going out at Sheffield United. The stakes were high. Rugby Town Academy are a very good outfit so this was always going to be a challenge for both teams to advance to meet EFL One Burton Albion Academy in the next round. With a mixture of tension and adrenalin soaked excitement in the air, City greeted Rugby Town to a perfect autumnal night in Claines.

We welcomed Tom Griffin and Josh Schuck back from injury into the starting line up, and the ref got proceedings underway. Both teams eased into the game, slowly and deliberately testing each other. Nerves were on display as a few passes went adrift; then in the 12th minute a slightly late tackle in the City box was adjudged to be a penalty. Rugby Town's Ryan Pedley stepped up to face Ben Clay in Goal. He gave Ben no chance rifling it into the top left of the goal. 0-1. Not the start City wanted. Both teams had opportunities as they grew into the game. Spectators were given early warning this was a seriously high quality game with both teams looking to play attractive, attacking football. However the score remained 0-1 at HT.

Seriously! What a half time talk! City came out firing on every cylinder they had. And with the momentum behind them Kane Harold entered the box (48th minute) and elegantly danced his way through the visitors' defence, calmly side footing the ball into the net. 1-1. Fantastic goal packed with technical skill. But the spectators were treated to even more. With the wind in their sails, City looked very dangerous in their 3-4-1-2. The three frontmen were given licence to wreak havoc. When in the 55th minute, Zach Humphrys put a ball down the right wing for Tristan Webby to run onto it, we all knew that he'd just over cooked it slightly. We didn't reckon on Tristan's pace and tenacity; somehow he kept the ball in play taking it to the bye line and getting behind the defender to cross the ball into the area. Kane was waiting but under pressure, so the ball went to Owen Oxley who laced it bottom right 2-1. Brilliant goal to watch to put the home team into a deserved lead. The game was as nerve wracking as it was easy on the eye. Both teams on top form playing quality cup football. When a fantastic bit of teamwork put Owen Oxley in on goal in the 74th minute he buried it to make it 3-1 and a mountain to climb for the visitors. Fair play to Town, they never gave up. They used their free kicks well looking to claw one back; but also pressed high in open play. City's defence held as Rugby threw everything at them. The City midfield and defenders dealt with it all. And as the final whistle went, there were early fireworks let off over Worcester - City celebrated quietly - they had nothing left in the tank.

I think all who saw this would agree it was a tremendous advert for U18 football. Both teams entertained from the first.Our chairman Steve Goode said: "Well played great team performance and privileged to be there to witness it."

So now we face Burton Albion away in the FA Youth Cup First Round - the game needs to be played before Sat 7th November. Let's see what the City Youngsters can do against an EFL One Academy.

FA Youth Cup - Please note that this game is SOLD OUT