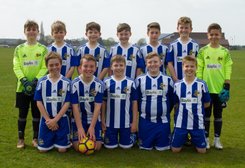 Match report by Alex Round

Worcester travelled to Stourbridge this morning to face the old rivals. There have been some great games against Stourbridge in the past and today was no different.

A slow start again let Stourbridge take an early lead but the game soon settled down into a great game of battling football. Worcester soon took control of the game with an amazing second quarter, promptly equalising though a thunder bolt free kick from Sam Sheen, forcing Stourbridge back and pressing hard, winning the midfield battles and some swift passing moves.

With the game going Worcesters way, the pressure paid off with a brilliant goal early in the last quarter, some slick passing lead to a drilled cross into the box from Sam Sheen, which was neatly despatched into the top of the net by Oliver Pierkarski.

It looked like the game was won, but Stourbridge to their credit pushed hard in the last 5 minutes, frantically searching for that equaliser. A corner was whipped in and we just couldn’t get it clear, the ball bobbled around box, we were not sure who got the final touch but it went in somehow to cruelly snatch the win off the Worcester boys with seconds remaining.

Both teams worked hard, We feel we should of won the game but Stourbridge will be happy with the somewhat fortunate point.

Well done to both sets of lads, there was some great football played by both.