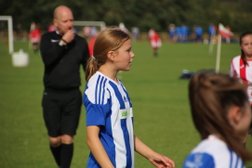 City put in a dominant display

The girls had their first away match of the season against a new side, Evesham United.
After a slow start, WCFC got into the game with some positive play from Hollie and Eva. WCFC attacked with pace and caused Evesham problems defensively. The girls continued their attacking play and had taken their learning from training, by closing the ball down well. The girls took the lead through Eva. From then on, WCFC looked confident when going forward. Evesham started to come into the game, drawing Mia into action. WCFC extended their lead through Indie, with a wonderful long range effort, which will certainly a contender for goal of the season. Further goals from Ruby and Eva meant the girls went into half time feeling happy . Today's half time team talk was full of praise, especially compared to last week's....
Following several changes throughout the game, the attacking play continued to be positive, with some excellent passing from all of the girls. Hollie scored a lovely team goal, which was assisted by both Indie and Birmo. Further goals from Ruby, Mia and Eva ensured the girls left the pitch confident and optimistic for the season ahead.
Credit to Evesham for their determination and attitude throughout the game, and for hosting.
Player of the match: Hollie - not only for her goal, but also her all round play. Her dribbling and passing was fantastic. Her best performance in a WCFC shirt.
Share via
FacebookTwitter
https://www.worcestercityfc.or
Recent news