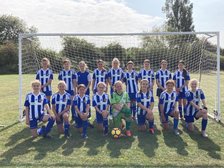 WCFC edged out by later winner

City put in a gritty display

Last night the girls had their final pre season friendly against Kidderminster Harriers.
Harriers started the game well with some nice football. As the game developed, the girls grew into the game and started to play some nice football themselves. Mia made some superb saves during the opening half, and kept the score at 0-0. After a positive attack from the girls, Lily J scored her second goal of pre season to put WCFC one up. The confidence grew within the team, and Indie and Eva started to dominate the midfield.
The girls went into half time 1-0 up.
The second half saw Mia change her hat twice and even had a pair of sunglasses on. However, the sunglasses only lasted 30 seconds as when she put them on, and Harriers scored.
The game was becoming tense, with Millie, Alice and Meg putting in some vital tackles, Ruby looking particularly dangerous on the break. WCFC were unlucky to see Harriers take a 2-1 lead in the final few minutes.
With the last kick of the game Eva had the chance to make it 2-1, but it wasn't to be.
A great game to watch, and all parents, coaches and players should be proud of the efforts. They stood up for themselves, competing for every ball.
Player of the match - Eva - her never say doe attitude and commitment throughout was fantastic.
Share via
FacebookTwitter
https://www.worcestercityfc.or
Recent news