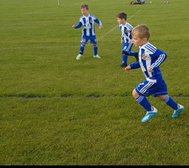 Another weekend and another win for our talented young team. The pitch was wet and grass was long so from the start it was going to be difficult to get our passing going. However the boys adapted well and proved far too strong for Wychbold running out winners. With so many goals it is difficult to go through the report as usual so a look at individual player performances instead.

Noah has proved composed on the ball and always plays the simple pass. Today I wanted to test him in defence and see how he got on in a different role. He adapted really well and anything that came his way he mopped up and played out. With 5 minutes to go we switched him to striker after everybody else had scored it would have been nice for Noah to grab a goal to put the icing on the cake of a solid performance.

Kai played in every role today showing he is becoming more versatile each week. Not troubled in goal, solid in defence and his goal scoring is now becoming a regular occurrence as he snatched one when playing as striker and deserves Player of the Week⚽.

Likewise Harry played in almost every role. He is calm on the ball, plays good passes, is excellent in goal and today got on the score sheet after working really hard all day⚽.

Eddie was back to his best today, a true box to box midfielder typified by his goal. He tracked back, won the ball in our box and dribbled all the way up the pitch to score a well deserved goal and earned the Man of the Match trophy⚽.

Harvey reverted more to his natural position as striker today. Like all the best strikers, Harvey is learning to be in the right place at the right time. He can beat players but he is always there to fire the ball home and grab goals ⚽⚽.

Barney is becoming a real handful for teams with his great skills and ability to use both feat to ghost past players. He creates chances for others but often goes alone and finishes with confidence. Today he scored a great hatrick and was also prepared to help out in goal ⚽⚽⚽.

Isaac is a powerful and strong player that can dribble well. He is sometimes a bit too strong in the challenge and loses concentration but today in the final 10 minutes he was unstoppable as they tired. He has started to get his head up more and put some great crosses in today too. He scored a great solo goal dribbling from trigger before firing the ball in the top left and also did a turn in goal, despite hanging off the net most of the time⚽⚽⚽⚽.

Overall another good result but we will need to up our level and get our passing going next week to beat a Bromsgrove Sporting team who are going to be physical and strong.