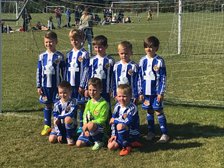 Looking good for the season

Another Sunday another tournament and much like last week, from what I heard, the boys played very well.

A different format to other tournaments with longer games gave us the chance to play against probably the stronger opposition we might face in the league this season. West Worcester is always a close game and today was no different. We had them pinned in a long time without scoring but Kai didnt have a save to make at the other end. Barney was is good form, looked strong and ran well at players causing their defence problems and bagged two goals. Solid defending from Harry and Alfie and then a great save from Harry in goal ensured the clean sheet.

Up next L&B Celta, a physical side, who matched us for physical strength but early goals from Isaac after mazy runs took the game away from them. Harvey made 3 or 4 great saves at the other end before Barney grabbed a third goal. He then went in goal and again made a couple of good saves to finish with another clean sheet.

We topped the group so played L&B Depor who won both their games. We again created lots of chances with Harvey latching on to a strong shot from Eddie and tapping in comfortably. At the other end both Harry and Kai were solid in defence with Isaac and then Eddie rarely troubled in goal. On fire Barney banged a hatrick to finish with six goals for the day.

We have a few things to work on but as a unit we are very hard to beat and teams find it difficult to score past us. That is a mixture of us dominating the ball, pressing high and working hard to win it back. Occasionally we are still getting caught on the break so we will start working on shape and transition in the coming weeks to help improve those aspects. The passing looks great too, I was really pleased with Kai, Harry and Noah today who all were composed on the ball and played some lovely passes.

Next week we start the league away at West Worcester.

It will be a 9.15am kick off at Lower Broadheath.