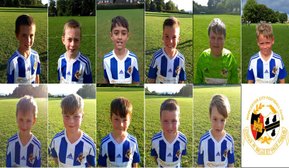 First Half
Both teams started the first half well, but City were being put under pressure pretty quickly from a well organised Crusaders team.

In the 6th minute, Crusaders converted the early pressure into a goal by passing well around the City penalty box before shooting home.

In the 7th minute, City had their first chance to pull a goal back. Nathan found himself with the ball on the edge of the Crusaders penalty box and unleashed a shot. The ball was directed at the middle of the goal and unfortunately for City, the Crusaders goal keeper was able to gather the ball into his hands.

In the 11th minute, City were punished further when Crusaders managed to score another goal.

In the 20th minute, City had their second chance to pull a goal back. Toby carried the ball into the Crusaders penalty box before striking at goal. His shot was destined for the back of the net before the Crusaders goal keeper managed to parry the shot away with his hands and the ball went out of play.

In the 23rd minute, City had their third chance to pull a goal back. City had won a throw-in near the corner flag of the City half; Tom threw the ball up the line and found Luke. A Crusaders player immediately closed Luke down and sensing this, Luke back heeled the ball to Theo. Theo turned on the ball and played the ball to Toby who was running into the Crusaders half. Toby collected the ball and then rounded a defender on his way into the Crusaders penalty box. Once into the box he unleashed a shot but unfortunately for City, the goal keeper manged to pull off a save.

Second Half
In the 29th minute, City had their fourth chance to pull a goal back. City players; Theo, Olly and Toby created a great string of passes just outside and into the Crusaders penalty box. The final pass was to Nathan in the box and he struck at goal, however the ball went just wide of the post.

In the 30th minute, City were punished further when Crusaders managed to score another goal.

In the 31st minute, at the fifth time of asking City managed to pull a goal back. Nathan won the ball off a Crusaders player around the centre circle and the ball was played out to the left wing to Toby. Toby picked up the ball and ran down the wing powering past a Crusaders defender, the defender pursued Toby and as he neared the corner flag he had to check his run which wrong footed the defender and left Toby with a clear run towards goal. As he ran into the penalty box, Toby struck a shot at goal, from what looked like an impossible angle. To the delight of the City supporters, the ball found its way into the net despite the goal keepers best efforts to keep it out (that was Toby’s second goal of the season).

In the 35th minute, City had their final clear cut chance to score a goal. Nathan made a run from the half way line with the ball and as he entered the Crusaders penalty box he took a shot but the ball went just wide of the post.

In the 46th minute, Crusaders scored another goal through a long range shot.

On another day, City could have come out of the game with at least a draw, if they only managed to put away some of those great chances that they had created.

Well played Crusaders and good luck for the rest of the season. The match was watched by a few dozen respectful spectators who enjoyed a great game of football. All the City players put in great performances in the game but it was Luke who was awarded man-of-the-match.