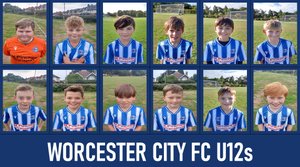 First Half
The first half started with both teams trying to gain an advantage, chances were being created by City and on another day, some of these would have found the net bulging.

In the 3rd minute, City created a goal scoring chance. Max was attacking with the ball down the right wing and as he approached the goal line he cut in towards goal. As he progressed into the penalty area, he had in turn, two Panthers defenders attempt to tackle him and Max used his quick feet to take the ball past them both. From a tight angle, Max attempted a shot at goal which was initially blocked by the Panthers keeper and the ball fell to a defender to clear. The clearance kick only got as far as the edge of the penalty area as Toby intercepted the ball and attempted a shot but unfortunately it went just over the cross bar.

In the 9th minute, Panthers opened their scoring account in the match. A Panthers attacker crossed the ball from the right wing and a looped shot from the middle of the area went over Tom the City keeper and into the net.

In the 10th minute, City opened their scoring account in the match. City were attacking with Toby in possession of the ball on the left wing, as he approached the corner of the Panthers penalty area, he crossed the ball into the centre where Ewan had made a run and was in space just outside the area. Ewan controlled the ball with one touch and then unleashed a shot with his next, which flew into the right side of the goal (that was Ewan’s third goal of the season and Toby’s fourth assist).

In the 28th minute, City created a goal scoring chance. City had won a free-kick on the right-wing and just outside the corner of the Panthers penalty area; Toby stepped up to take the kick. His shot was almost perfect, but instead it flew through the air and struck the junction of the crossbar and right post of the Panthers goal and then went out of play for a goal kick.

Second Half
City felt like they edge the first half overall and wanted to go out in the second half to make their possession and chances count, but in the end they struggled to do this despite scoring first.

In the 35th minute, the City defence denied Panthers a goal scoring chance. The Panthers team were attacking with one of their players in possession of the ball just outside the City penalty area, he took a shot at goal which was heading for the left corner of the net before Tom the City keeper dived to his right and blocked the shot with his outstretched hand, he couldn’t hold onto the ball initially but was soon to his feet to collect it up.

In the 37th minute, the City defence denied Panthers a goal scoring chance. The Panthers team were attacking with one of their players in possession of the ball on the left wing; they crossed in a ball that found one of their players in the middle of the City penalty area with no City player close enough to challenge them. The Panthers player jumped to head the cross and the ball looked like it was heading for the top centre of the goal before Tom the City keeper jumped with an outstretched hand to block its path and push it away from goal for a City defender to clear.

In the 38th minute, City scored another goal in the match. City were attacking with Toby in possession of the ball on the left wing and half way into the Panthers half, he looked up to spot Max in space in the middle of the pitch and played the ball into his path. Max collected the ball and with a couple of deft touches took the ball between two Panthers defenders leaving him one-on-one with the Panthers keeper. Max ran with the ball into the penalty area and shot low into the centre of the goal as the Panthers keeper attempted to drop on the ball, but the pace on the shot meant it went under him before he could stop it (that was Max’s thirteenth goal of the season and Toby’s fifth assist).

In the 44th minute, Panthers scored another goal in the match. The Panthers team were attacking with one of their players in possession of the ball just inside the City penalty area and in a fairly central location, a number of City and Panthers players were between them and goal and they decide to shoot to the bottom left corner of the goal. Tom the City keeper saw the shot late through the crowd of players and dived to his right and managed to get fingertips to the ball but was unable to stop it from going into the net.

In the 46th minute, Panthers scored another goal in the match. Panthers were attacking with a player just outside the City penalty area; they played a looping shot which went over Tom the City keeper and into the net.

In the 58th minute, Panthers scored another goal in the match. Panthers played a ball from the right wing to the back of the goal mouth where a player shot into the bottom left corner of the City net.

Well played Panthers and good luck for the rest of the season. The match was watched by a couple of dozen respectful spectators who enjoyed a great game of football. All the City players put in great performances in the game but it was Toby who was awarded player-of-the-match.