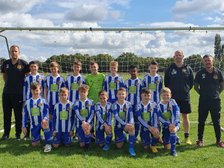 Colts come up short against accomplished opposition in Cup

Nunnery Wood Colts Hornets were Colts guests at a bright and breezy Perdiswell Park on Sunday 11th October in the first round of the Ron Handy Memorial Shield, the premier (and only) cup competition that the U12 Colts would be involved in during the 2020-21 season.
Having shown good form in the league so far this term (albeit playing below their perceived level) Hornets were sure to provide a stiff test of the home teams credentials.
Manager Stephen Coopey named an unchanged line-up after the impressive win against Wilden the previous week, with Elton, Beale, Sivaharan, Glazzard, Heywood, Coopey Jr, Bousfield, Box and James providing the starting 11 and Johnson, Perks, Davies, Fisher and the returning Clarke providing support on the bench.
Hornets started on the front foot, and in getting men forward early on provided plenty of problems for Colts in the opening moments. Cam Elton had to be sharp to repel the continued barrage and Hornets should probably have gone ahead but saw a couple of attempts skim past the post. The defence found themselves stretched a little too far after 12 minutes after a failed clearance fell to a Hornets attacker who prodded home. Despite the early setback, Colts grew into the game and found a fighting spirit that was missing at the start of the game. Heywood and Sivaharan grew in stature as the half wore on; Bousfield almost unlocked the visitors defence with a determined run down the left but was unable to get a shot away. Conner James shone throughout and consistently held the ball up well and released Coopey into space in the channel on more than one occasion. The home teams best performance of the first period came after Box delivered a lofted corner onto the head of Sivaharan whose header was on target but safely gathered by the Hornets keeper. The half came to a close with Colts in the ascendency, Heywood finding himself in space after a penetrating run but missing his footing when well placed.
Half Time came with Colts 1-0 behind and Manager Coopey made a double replacement, Box being replaced by Perks and Beale with Clarke. The second period started in the same manner as the first had ended, a combative affair with little in the way of clear-cut chances at either end. Davies joined the fray in place of James and Fisher also took his bow. Colts had the Lions share of the possession for a good period in the second half but it was Hornets who struck a sucker-punch halfway through, when a corner wasn’t effectively dealt with and the ball was drilled home through a mass of bodies for 2-0. The Visitors then had a golden opportunity to extend their lead further with a rocket from 15 yards out only for Elton to pull of an excellent save, diverting the ball over the bar. Glazzard, who had enjoyed another solid game, made way for Johnson and Colts continued to strive without reward, Davies having the best chance of the second half, picking up the ball outside the area and firing through the defence – his shot comfortably gathered by the keeper.
With 5 minutes left and spaces starting to open throughout the pitch, Hornets scored a third after the moment of the match, a sweeping move finished off with a thunderbolt that left Elton with no chance and sealed the result in their favour.
3-0 was possibly a harsh scoreline given the dogged level of performance however Colts can be pleased with the general work ethic and determination against quality opposition.
So Colts are out of the cup at the first hurdle - now to concentrate on the league!