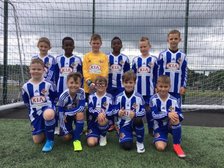 After a disappointing result and performance in the Rugby world Cup Final this morning our attention turned to a game against our rivals from previous seasons, Nunnery Wood.

The biggest question before kick off was whether the time spent in the JPL would have opened a gap. In terms of development, or whether the more physical approach of the Stourport league would win out.

The opening third was an absolute pleasure to watch, the football on show was superb with one touch pass and move the order of the day. We were dominant and the most pleasing aspect from the coaches point of view was the willingness to start again from Evan M whenever we needed to. We should have wrapped the game up in that first third such was our dominance, and a mixture of wasted chances and brilliant goal keeping kept the score to a solitary true striker’s goal from Austin, who was in the right place at the right time to tuck the ball away.

Our challenge to the boys at the interval was to keep the football going. And to their credit that is exactly what they did and our ability to play short triangle passes meant that whenever we were pressed we were soon back on the attack. Once again we were dominant and retained possession really well. Ev Kelly extended the lead with his well taken first of the season and despite all the pressure we couldn’t extend the lead.

In to the final third and the game became a little more scrappy and whilst we couldn’t match the football (particularly from the first third) we still held the upper hand. In games past we could quite easily have panicked when Nunnery nicked one back, but the boys showed their superiority through a long range strike for Austin’s second and a debut goal for the excellent Caleb.

The scoreline didn’t quite reflect how dominant we were. There were some really strong performances and it was very difficult to narrow down the awards today to just three. Before we get to the awards a few special mentions are deserved. Ev Masters is so important to the way in which we want to play, and today he started every attack brilliantly with great decision making and distribution. The defensive trio of Will, Jack and Dylan all played their part in controlling the game with excellent distribution, Ev Kelly always a threat with his quick feet and Ben F commanding the midfield, keeping it simple and playing some excellent passes.

Isaac was outstanding today, playing slightly out of position on the right. He was confident on the ball, happy to take players on and delivered some wicked crosses from his either right or left foot!

A debut to remember for Caleb with a goal, an assist and a commanding performance out on the left hand side.

The only recognised striker in the squad it was fair to say there was a fair amount of pressure on Austin before kick off. He deserved his award for the way he held the ball up in the final third, as we have been asking him to, and brought other players into the game.

A great all round performance after a few weeks without a game. We are all looking forward to returning to the JPL next Saturday.

Given we have reached half term we will be sharing our thoughts on the progress of each of the boys and an area we would like them to concentrate on developing over the next part of the season. These short reports will be with you in the coming week and we are more than happy to discuss any aspects of them at a convenient time.