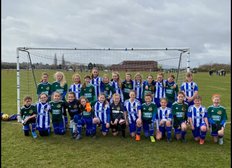 The Lionesses came out of the blocks fast, hitting the post with the games first attack. WCFC Girls slowly grew into the game, by having some positive attacks. The match was end-to-end with both Mia and Bo making some good saves.

The deadline was broken some good play saw Ruby score for the Girls. Just before half time, the Lionesses had a great chance to equalize, with Ava seeing her shot cleared off the from line from Birmo.

The second half saw the game continue its positive play with sides looking for goals. A goal from Laila saw the Girls double their lead, only for Ava to score a lovely goal to half the deficit. As the game was coming to a close, both sides started to look tired with WCFC scoring a few more thanks to Laila, Ruby and Sophie.

The defending throughout the game from both sides, with special mentions to Alice, Farrah, Emily and Lily J for their performances today.

Today was a great morning for not only Worcester City, but a fantastic advert for girls football. Every girl played the game in the right spirit, and all came off smiling. Well done to everyone involved!