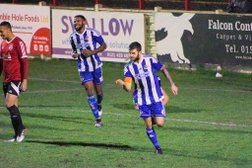 CITY THROUGH TO THE THIRD ROUND OF THE FA VASE

City moved into the third round of the FA Vase after a 3-1 at home to Dunkirk.

City came racing out of the blocks, showing their attacking intentions within the first few seconds when Demetri Brown's cross / shot from the right went narrowly over the bar.
City put plenty of pressure on Dunkirk in the opening exchanges but it was the visitors who should have taken the lead in the 7th minute when Sasha Marilelic was put through but Dan Jezeph did went to save.

City bounced back with constant pressure forcing several corners in quick succession to no avail. Just as it looked like it might be a goalless first half City scored the opener. After forcing another corner in the 36th minute, Luke English headed home Liam Lockett's outswinging kick.

Minutes later it was 2-0 when Liam Lockett Lockett cut back to the right corner of the box to Demetri Brown who fired across goal and into the net from the edge of the box. But within a minute the visitors pulled one back when Ellis Evans' superb through ball was met by the fiery Shannon-Lweis who prodded home.

City created plenty of chances in the second half, mostly by Liam Lockett with the best being a pull back from the goal like to Demetri Brown who was flat footed and missed the target.

With three minutes left, Lockett again danced through the visiting defence and the ball ended up at the feet of the City skipper who smashed how to earn City a home tie against United Counties League leaders Shepshed Dynamo.

Match Highlights are on WCFCTV

Player of the match