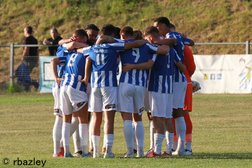 The Hillsiders come out on top

Two first half goals for Malvern Town was enough to see off a resilient City side this afternoon at the HDanywhere Stadium.

City started the stronger of the two sides with great chances for both Brown and Brain, who both fired wide within the first 5 minutes.

Malvern then took the lead on 23 minutes. The ball fell to the feet of Horrell who lashed home in to the top corner.

The hosts then doubled their lead just 3 minutes later. Hayes beat his man and glanced a header past Harrison in the City goal.

City pressed, but The Hillsiders took every chance to slow the game down and saw it out until the half.

Much the same, the second half was broken up and slowed down by the hosts. City pressed but struggled to find a meaningful opening.

On 64 , City got their reward. Substitute Elliott Hartley broke clear. He squared to Demetri Brown who finished in to an open net.

Just as City had the momentum, Malvern countered and caught City short. Tibury lunged for a last ditch challenge, catching his man and received his second yellow card.

As City shoved everyone forward looking for the equaliser, the hosts went in to turbo game management mode, slowing the game to crawling pace.

The final chance for City came as the game approached stoppage time. Aaron Roberts span off his man and found space at the back post. His header was cleared off the line, and City's hopes of dragging themselves level faded away.