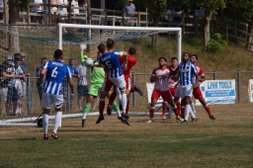 The Blue And Whites dominated possession of the ball in the early stages, not allowing the visitors time to settle into the game. The first chance of the game fell to Bobbie Dale in the 9th minute. His header from the edge of the box looping just over the crossbar.

The early stages set the pattern of the game, with City controlling the ball, but being unable to break through a resolute Market Drayton defence and create many clear-cut scoring opportunities. Market Drayton’s goalkeeper George Scott, a stand out performer, had a comfortable time catching numerous balls into the box.

The visitors' first chance of the game arrived on the 40-minute mark. City goalkeeper, Adam Harrison was able to get his hand on Kian Garbett’s powerful free kick and tip behind for a corner. The following set-piece saw The Gingerbread Men open the scoring. Keefe Williams found himself free at the far post, heading on goal and giving the visitors the lead going into the half.

The second half continued in the same manner, with City controlling possession of the football. Market Drayton sat back and comfortably soaked up the City pressure, refusing to buckle in the pounding sunshine. Notable efforts from Bobbie Dale in the 52nd minute and Billy Shaw in the 84th minute were comfortably saved by Scott, the Market Drayton goalkeeper.

Half-time defensive substitute, Fortune Maphosa came close to troubling the visitors' goal on two occasions. On 76 minutes the centre-back hit an effort from distance, ricocheting off a Market Drayton defender. The ball looped and was read wrong by Scott, but went agonizingly wide. Maphosa then went close again in the closing stages following a quick corner, but his volleyed effort was too high to bother the Market Drayton goal.

City pushed hard in the closing stages but were unable to find a way through a strong and dogged defensive line from the visitors. A frustrating afternoon for those in Blue And White, which saw Market Drayton depart from Claines Lane with all 3 points.

Next Saturday sees a trip to newly-promoted Darlaston Town with The Blue And Whites chasing their first victory of the season.