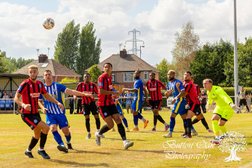 The Blue And Whites made the trip to Darlaston Town on Saturday 20th August in the second game of the 2022-23 Midland Football League campaign, facing off against the newly promoted side.

City started brightly seeing Billy Shaw shooting low from 25 yards, but his effort running wide, in a reasonably quiet opening 15 minutes, with both sides tentatively working their way in to the game.

17 minutes saw the first effort on target. Ben Pedmore rose highest for the hosts, but his header was straight in to the hands of City keeper Adam Harrison. 2 minutes later came City's first real chance on goal. Demetri Brown received the ball on the edge of the box but his powerful volley flying wide of the post.

On 29 minutes, Darlaston broke in to the City area rounding Fortune Maphosa. The defender dragged down his man, conceding a penalty which was cooly despatched by Dominic Dell to give Darlaston the lead.

New signing, Lucas Powell then went down on 37 minutes through injury, forcing Tim Harris in to a first change. Reiss Taylor-Randle replaced.

As half time approached, Darlaston had a glorious opportunity to double their lead. Mardenborough beat out the long ball and squared to Dell who blazed an effort in to the trees behind the goal.

Harris looked to inject some urgency in to The Blue and Whites with a double change at half time, seeing Muirhead and Douglas enter, with Tyreace Brown and Maphosa removed.

City huffed and puffed, but could not find a route through a determined and resolute Darlaston defence, who saw off every cross, corner and attack. Craig Jones' headed effort on 65 minutes was the closest they came, but the central defender couldn't keep his effort down.

Darlaston had a glorious chance to double their lead on 81 minutes. Dell's effort was well saved by Harrison, but the rebound fell straight to Miller who lashed a first-time effort from 10 yards out, somehow smashing the ball into the advertising hoarding behind the goal. Unfortunately, City didn't make the most of this huge let off and Darlaston then did add a second as the game ticked in to stoppage time. Lewis Gill and Keiron Miller linked up on the edge of the box with a quick one through. Gill beat Tilbury to the pass and slid the ball past Harrison to double the lead.

A disappointing day for City, who will look to kick the season into life against another newly promoted side, Atherstone Town on Saturday 27th August, in what looks set to be another tough away tie.