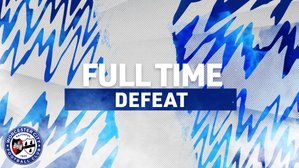 Bewdley Town were the visitors to Claines Lane on Tuesday evening, in the first home game for a month for The Blue And Whites.

In a lively start to the game, both teams looked equally capable of taking the lead in a tight and even first 30 minutes.
The first real chance fell to City on 9 minutes. A string of shots from inside the area were all repelled by the Bewdley defence, when it looked for certain that one was going to nestle in the back of the net.

Bewdley looked lively on the counter-attack and 5 minutes later Dylan Hart found space in the City box, but his effort was straight at Adam Harrison.

In an even affair, the tie looked like it could possibly tip in City's favour ahead of the halftime break when Bailey Fuller burst in to the penalty area, rifling a deflected effort just wide of the right-hand post. From the resulting corner, Bewdley countered. A sliced clearance saw Hart clear through 1-on-1 with Harrison, and the striker cooly slid past the keeper to give the visitors the lead.

Moments later, Bewdley doubled their lead. Kyonn Evans was fouled on the edge of the City penalty area. Nathan Oyemade stepped up and thundered a strike into the postage stamp, stunning Claines Lane into silence. The referee blew for halftime with the visitors 2-0 to the good.

City started the second half brightly, with Billy Shaw finding space for an effort, but on 51 minutes the tie was wrapped up. Cameron Monteith brought down Hart in the box. The forward stepped up, drilling a strike straight down the middle and putting Bewdley into a 3-0 lead.

The Blue And Whites pushed forward, but for all of the intricate play, the Bewdley keeper was rarely tested.

Harris rang the changes on 60 minutes, which saw a return for Chris Withington, who had been sidelined through injury since the start of the season. A welcome return.

Bewdley closed out the tie and picked up the 3 points.

The defeat see's City stuck to the bottom of the league after 6 games played. Next up is a string of home games, seeing Whitchurch Alport visit on Saturday 17th September before Stourport Swifts are the guests on Tuesday 20th September.