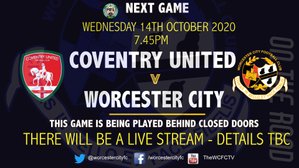 City's poor discipline once again proved costly in a game which saw two penalties for the hosts and a sending off for City.

The first penalty came in the first half after Luke English made a needless challenge on the edge of the box which was converted by Riley O'Sullivan.

English, who had earlier been booked for a late challenge was then shown a red card within a minute of the goal and it was as good as game over for City.

Any hopes of a City comeback were dashed four minutes into the second half as Ryan Winwood fouled Williams in the box which was converted by O'Sullivan from the spot.

City had plenty of possession with a man short but rarely troubled the opposition and United allowed the game to fizzle out to claim the points.

Please note that this game is being played behind CLOSED DOORS - The Match will be Live Streamed by Coventry United, stream details will be announced via Social Media.