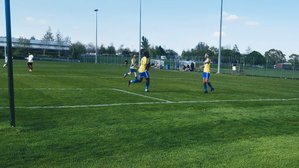 City made the trip to Shrewsbury to take on bottom of the table Haughmond on Saturday 23rd April. With Haughmond looking for 3 points to try and save themselves from relegation, they proved to be resolute opponents for City, who left it late to secure the victory.

With a swirling wind and hard pitch, the conditions didn't lend themselves to free-flowing attractive football, resulting in a match that won't live long in the memory for those in attendance.

Haughmond started arguably the brighter of the two sides, playing some nice counter-attacking football, but were twice stopped in their tracks by the linesman's flag. The first effort on target came City's way through the energetic Mati Klich. The City forward broke down the right hand side and took aim, but his effort was well saved by Sam Jones.

Haughmond sprung in to life and turned up the pressure. Both Thomas and Pratt both had shots in quick succession, but both were dealt with by City's backline.

On 26 minutes, the best chance of the half fell City's way. Muirhead danced free through the Haughmond defence and curled an effort that was destined for the top corner. Jones, at full stretch, tipped behind with a fantastic save, keeping the scores level until the break.

The early stages of the second half saw a couple of half-chances for the industrious Mati Klich, but Haughmond stood strong to deny. The hosts also peppered City keeper Adam Harrison with a handful of efforts, but neither side drawing the goal keepers in to serious action.

As the clock rolled in to the 79th minute, Haughmond looked to catch City out, and had the ball in the back of the net, before the linesman raised his flag to the despair of the hosts, who desperately needed the 3 points. City then sunk the dagger in to Haughmond's hearts as the clock ticked over in to injury time. With Haughmond throwing caution to the wind, looking for a winner, The Blue And Whites countered. Fortune Maphosa beat the offside and found himself in acres with only the Haughmond keeper to beat. Staying calm, Maphosa closed in, committing Jones. He slid the ball square to Ben Tilbury who made no mistake from 10 yards out, finishing in to an open goal, consigning Haumond to relegation.

The win secured 4th place in the league standings for The Blue And Whites, finishing the campaign on 65 points from 36 games.