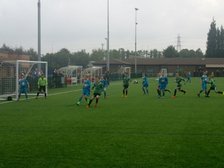 First away fixture for U12's

Worcester were welcomed by South Glos to the Gloucestershire FA astro.

The game started positively with South Glos pressing from the off. Worcester battled well and South Glos were unable to penetrate the solid and organised defence. Worcester were not given any time on the ball with South Glos relentlessly challenging for possession. South Glos appeared to have the upper hand with Worcester unable to play their football but Worcester stood strong and Charlie's determination saw him score two goals in quick succession. 0-2

Worcester started the 2nd quarter strongly, the momentum most definitely with them. The South Glos keeper made a couple of saves and their whole team continued to play positive football. Their quality shone through in a lovely move that resulted in a fantastic strike and the ball flying into the back of the Worcester net. Worcester came straight back with their team pressure causing an own goal. 1-3

Worcester continued to press and this quarter saw them play their football in style. Several saves were made by the South Glos keeper which kept the score to 1-5

South Glos came out for this quarter full of spirit and didn't deviate from trying to play passing football on the floor. They caused the Worcester keeper to make numerous saves and were unlucky not to score. A late penalty awarded to Worcester saw the final score 1-6.

Both teams always tried to play positive, attractive football and should be commended for this.