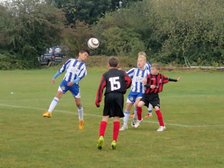 Today's game saw a huge change in the playing conditions for the boys.

What a taster for the winter ahead with the rain and wind howling around making very difficult conditions for the first meeting between Worcester City and Cirencester Town. Cirencester arrived very much the in-form team having scored 26 goals and only conceded 1 in their 3 previous games.
Both teams started positively, it was a really open game with action from end to end. Both defences stood firm not allowing the other to gain the advantage. The deadlock was broken when a free kick for Worcester was saved but followed up sharply by Ethan who directed the rebounding ball into the net. 1-0
The second period again saw some fine football from each team with both goalkeepers called upon. There were plenty of skills on show from individual players which are always a delight to see. The period ended 1-0
The third quarter saw both teams pushing for a goal and the Worcester defence worked as a great unit to keep Cirencester at bay. Cirencester were awarded a free kick on the edge of the Worcester box and it took a fantastic double save by Joel to deny the visitors the chance to go level. This spurred on Worcester who with some lovely play through the middle saw Alfie lay off a perfectly timed pass to Mac who fired the ball into the back of the net. Worcester visibly grew in confidence and the game started to flow in the way Worcester love to play. Mac once again saw a chance on the edge of the box and launched a shot at the goal which squeezed in between the crossbar and the keepers outstretched hands. 3-0
The final quarter remained at a high tempo with both teams pushing for more. Worcester were spraying the ball about the midfield always looking for the outlet, this was found when a perfect ball was sent down the wing for Mac who cut in and took a shot which rebounded into the net. 4-0
This was a great team effort from the boys who all took on board the training inputs during the week and should be very proud of today's performance.
Share via
FacebookTwitter
https://www.worcestercityfc.or
Recent news