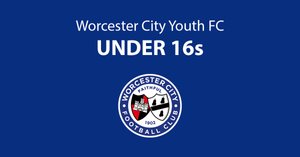 City halted Kidderminster Harriers Whites' long unbeaten run and progressed into the WFA County Cup semi-finals with a thrilling away win after a battling performance by every player involved.

The match ended 2-2 after normal time but it was the visitors who kept their cool in the penalty shoot-out as two of the home players failed to convert with their kicks saved by City stopper Josh Reed-Jones.

When the game began, Harriers were quick out the blocks with their slick passing and movement threatening to overrun the away side and they were unlucky not to take the lead when a shot crashed back off the underside of the bar.

City gradually settled into the game and created one or two half chances on the counter. After Reed-Jones made a great block with his legs to foil a one-on-one opportunity, he was beaten when a high ball into the box wasn't dealt with and Harriers headed in.

Whilst Kiddy had the better of the first-half, the second period was undoubtedly shaded by City as they stepped up pressure on the home goal. Will Cottell brought out a fine save from the home keeper before the visitors thought they had equalised when Jesse Asomugha stroked home - only for the referee to over-rule the linesman who hadn't raised his flag and disallow the goal.

However City weren't to be denied and the Harriers defence finally buckled when Fabian Hook scored with a fine header.

As the game entered the final minutes, the home side wasted a couple of good opportunities but, with three minutes remaining, scored what looked to be the winner.

City raised their heads and went straight back on the offensive and were rewarded when a penalty box melee saw the referee award a penalty for a handball.

With seconds remaining, Asomugha stroked the ball in to send the tie to penalties where he converted the first attempt of the shoot-out.

Reed-Jones then kept out Harriers two spot-kicks and, although Cottell saw his effort saved, Declan O'Shea and Cian Sheehan both found the net. It was left to City's final penalty-taker, Jamie Hill, to step up for the fifth and decisive penalty which he calmly fired home to the delight of his team-mates as the visitors progressed to the semi-finals.