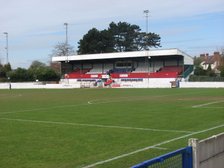 Worcester City Football Club is pleased to formally announce arrangements for playing its first team games for next season and beyond.

During recent weeks, the Club has worked alongside officials from Bromsgrove Sporting to ensure that the Victoria Ground, Bromsgrove is appropriately graded to allow Worcester City Football Club to play its home games at the venue. An agreement has been reached with Bromsgrove Sporting for a two year deal with the option of a third year.

This arrangement has today been approved by the National League, enabling Worcester City to play its home games at the Victoria Ground in Bromsgrove, from the start of the 2016-17 season

City Chairman, Anthony Hampson, said that “having looked at all options, Bromsgrove Sporting was considered to the best option for the Club, based not only on the financial considerations but also the extent of the work required to enable an appropriate ground grading certificate to be achieved.

Clearly the Club sees any ground share option as a temporary arrangement and it will continue to work tirelessly to return to the City of Worcester, as a matter of urgency. In the meantime, the Club is grateful for the support Bromsgrove Sporting has given to enable the Club to continue playing at its current level in the interim period”.

Alongside this announcement, the Club intends to continue to investigate travel and parking concessions for supporters and further announcements will continue to be made. The Club has already announced its details for season tickets, and it would urge supporters to look at this option and take advantage of the early bird discounts on offer.

Sporting Chairman, Jon Prescott, said that Bromsgrove Sporting were pleased to welcome Worcester City Football Club and looked forward to working with the Club, helping it to achieve its ultimate aim of returning to the City.