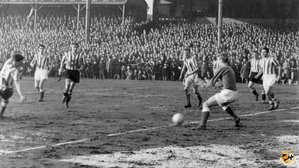 A brief look at the History of our football club. Click on the links for featured articles and for video clips from some of our most famous games. Our centenary book, The Official History of Worcester City FC is available in our online store.

Worcester City Football Club was formed on 9th September 1902 when another Worcester-based club, Berwick Rangers, went into liquidation. The Birmingham League agreed to let City take over Rangers' fixtures, and the Club moved to St. George's Lane in 1905. 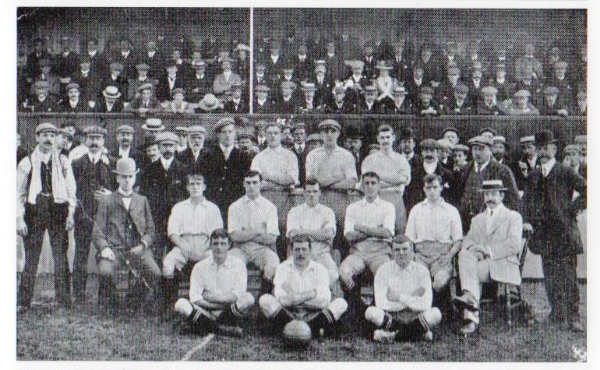 City's first honour was the Worcestershire Senior Cup, which was won for six successive seasons between 1908 and 1914, and in the final season before World War 1 a Birmingham League and Senior Cup double was achieved. 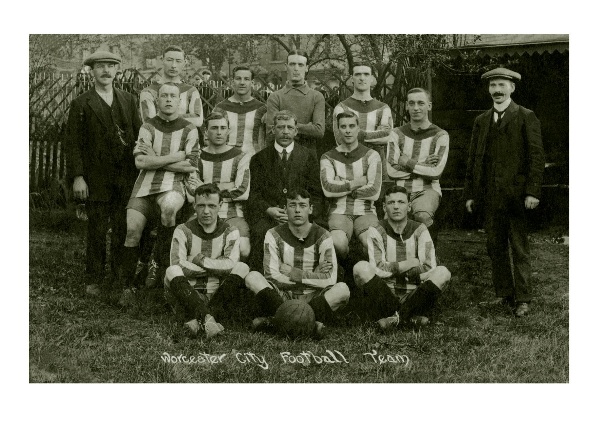 There was little success in the early post-war years, but eventually City began to attract some quality players and surprised everybody by winning a second Birmingham League title in 1924/25. 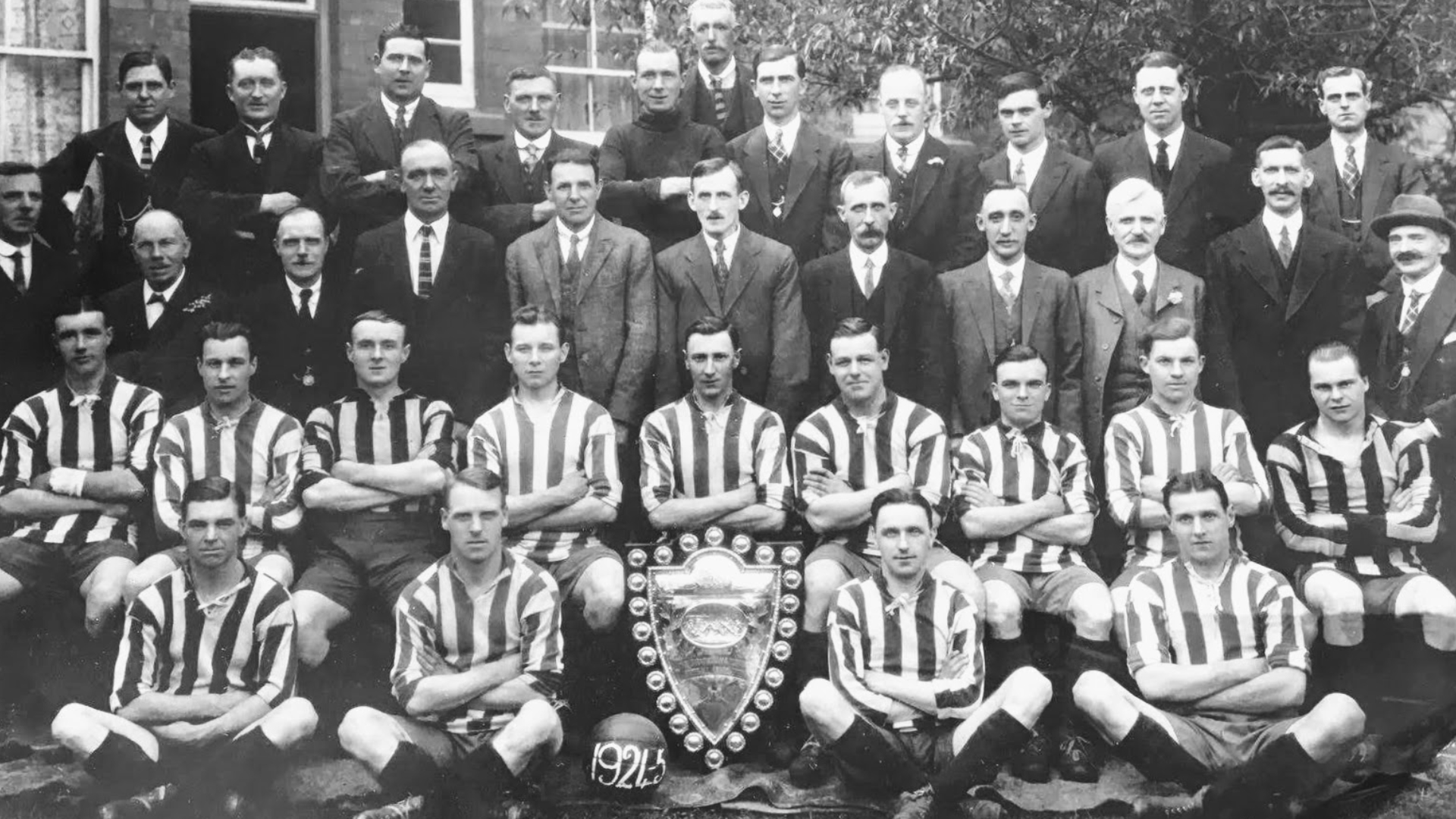 For 1928/29 City appointed a full-time player-manager, Frank Womack. City clinched the title with ten wins out of their last eleven matches, but Womack then stunned City by accepting an offer to manage Torquay United. He was succeeded by Joe Smith, an ex-England and West Bromwich Albion full-back. 1929/30 season saw the title won again, City scoring an incredible 153 goals in 34 games. At home they won all their matches, mostly by cricket scores, with a six, five sevens, an eight, two nines, a twelve and a (then) club record 13 against Stourbridge, with Billy Boswell getting six, a club record he still shares.

During the 1930’s the Birmingham League was considerably weakened as teams left and in 1938 City joined the Southern League, winning the Southern League Cup in 1940 – it was wartime and City were able to field several Football League professionals as guest players! 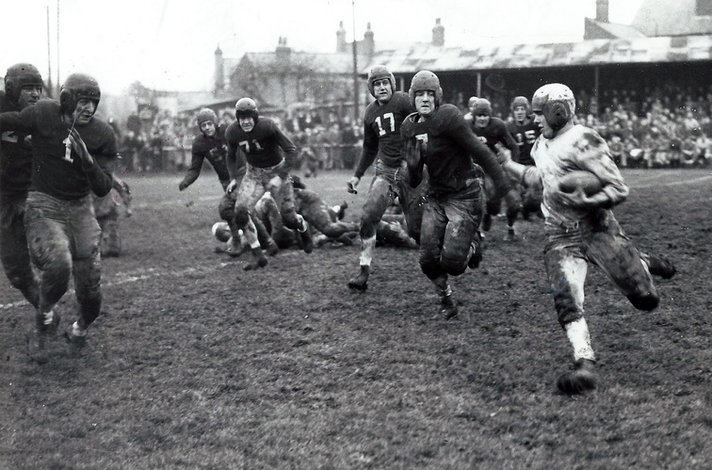 Although crowds flocked to the Lane when football returned after the war, there was little success until 1957/58, when under player-manager Roy Paul, City took Aldershot to a second replay in the F.A. Cup First Round, going out at St. Andrews, Birmingham in front of a crowd of 22,926 - a record for a City game. The following year, City achieved a famous Cup result which is still talked about today. They first beat Millwall and then Liverpool - at the time playing in Division 2 - at the Lane before losing to Sheffield United in front of a record home crowd of 17,042 in Round 4. 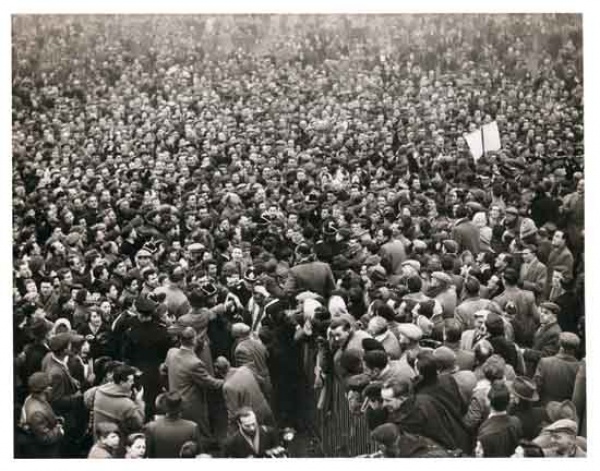 City players mobbed by Fans on the pitch after defeating Liverpool 2-1 at St Georges Lane.

Visit the Liverpool FC History website for information and the game from their perspective.

City nearly went out of business in the early sixties, but supporters rallied to keep the Club afloat and were rewarded with some big name signings. Players such as Peter McParland, Norman Deeley, Eddie Stuart , Ivor Allchurch and Gerry Hitchens all appeared in the blue and white shirt but it was not until the appointment of Nobby Clark as manager in December 1974 that the glory days truly returned.

The Southern League Division 1 North was won in 1976/77, with City gaining 69 points from a possible 76 and losing only one League match - the final one!

Two years later, the Southern League Premier Division title was won for the first time. The season would be memorable for many reasons. In the FA and Welsh Cups, there were outstanding home wins over Plymouth and Cardiff and a draw at Newport County. City seemed destined for a tie at home to West Ham United in Round 3 of the FA Cup until a last minute own-goal allowed Newport to level the replay at 1-1. The visitors went through after extra time in front of a crowd of 10,223 – the last-ever five figure attendance at the Lane.

A 5-3 victory at Kettering Town in the league at the start of November stands out as one of the best City matches of all time.

City’s biggest home crowd in the Southern League since 1966 - 7,386 – turned up for the penultimate home game against Kettering, our only rivals for the Premier Division title. Barry Williams struck two memorable goals in a 3-0 victory. The championship was ours, the citizens of Worcester celebrated and for a short while City were regarded by many as the best non-league club in the country.

In 1979, City joined the newly-formed Alliance Premier League (Now the Football Conference), and finished third in its inaugural season. There were further F.A. Cup successes at home to Wrexham and Aldershot, but Clark was dismissed as manager in 1984, and City were relegated back to the Southern League twelve months later.

In 2001 former City star John Barton steered his team to success in the Dr Martens Southern League Cup, and during his five and a half year reign as manager two City players – Adam Wilde and goalkeeper Danny McDonnell – were capped by England at semi-professional level.

In 2004 City became founder members of the Conference North but in January 2005, Barton resigned and another former City player, Andy Preece, took over. His greatest success came in 2005/06, when City reached the second round of the F.A. Cup, losing 1-0 to Huddersfield Town at the Lane in a game televised live on the BBC. To compound City’s misery, Huddersfield were drawn away to Chelsea in the next round.

In October 2007, Preece was replaced by Richard Dryden, assisted by City legend Carl Heeley. City switched to the Blue Square South for the 2008/09 season, with Carl taking over as manager at the start of 2010. City reverted to the Blue Square Bet North after narrowly avoiding relegation in 2009/10 and last season finished in 16th place.

The 2012 / 13 was the final season at St Georges Lane & the match v Chester FC on Saturday 27th April 2013 was the last ever game at The Lane, the attendance of 4,027 was the highest in the Blue Square North for the whole season. 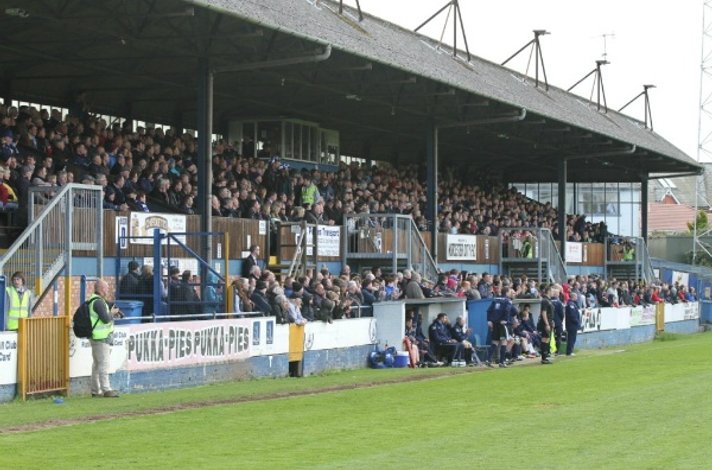 Worcester City FC ground shared at Aggborough, the home of Kidderminster Harriers FC for three Seasons whilst The Supporters Trust (backed by Supporters Direct) worked tirelessly to enable a return to Worcester. 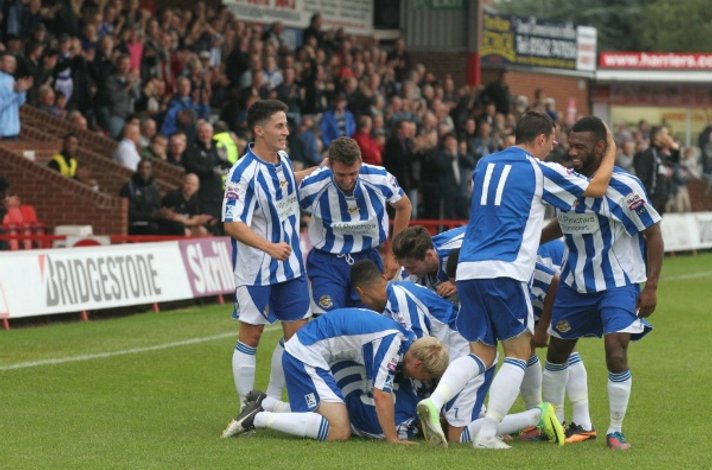 The 2014/15 Season proved to be one of the most memorable in our History, winning against a Football League Club away from home for the first time, when on Saturday 9th November 2014 two goals from Sean Geddes saw a memorable 1-2 win at The Ricoh Arena v Coventry City in the 1st Round of the FA Cup, backed by over 3,200 travelling supporters in a crowd of 8,439. 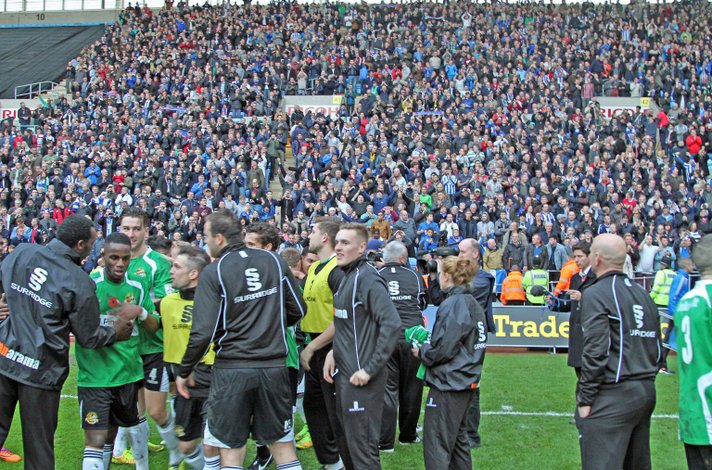 During the Cup run a moment of football genius brought world wide attention to the Club when Sean Geddes scored a remarkable "Rabona" goal which was seen millions of times on various platforms. The goal was awarded Runner-Up by Sky Sports viewers Goal of the Year for 2014 (behind Aaron Ramsey of Arsenal but ahead of Wayne Rooney of Manchester United) and was also awarded Non League Goal of The Season by the Non League Paper. 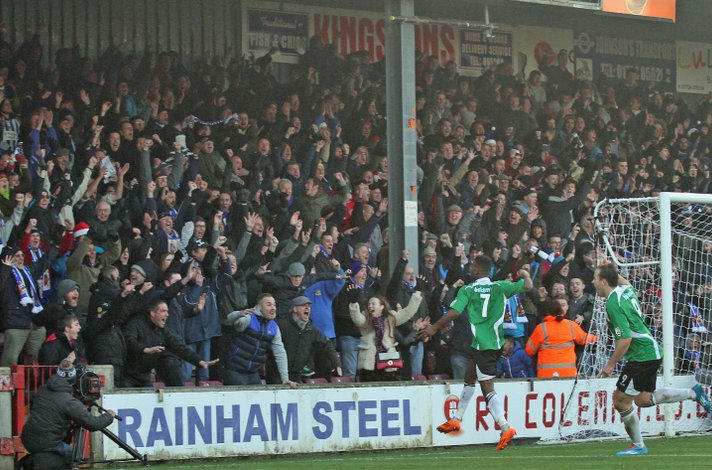 The Second Round of the FA Cup saw another memorable performance in front of 2,300 travelling fans, ending in a 1-1 draw away at Scunthorpe United thanks to a Daniel Nti goal, earning a replay at Aggborough in front of the live cameras, a worldwide TV audience & a home crowd of 4,339. The replay ended 1-1 after extra time and it took an FA Cup record breaking shoot out for Scunthorpe to eventually go through 14-13.

Daniel Nti scores to make it 1-1 at Scunthorpe 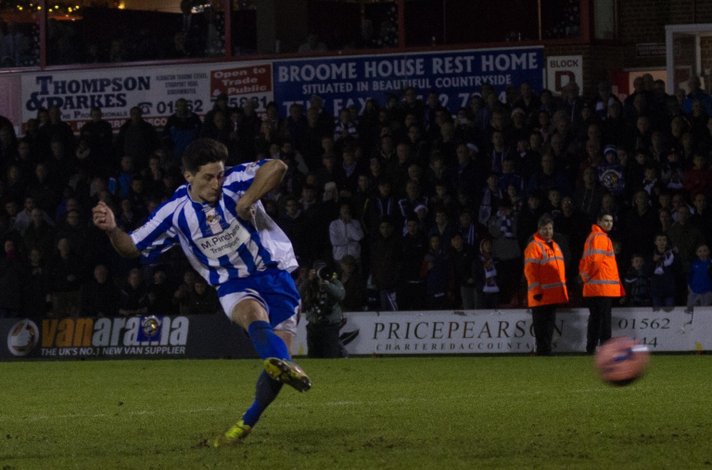 The following season City again reached the First Round Proper of the Emirates FA Cup before finally bowing out 3-0 away at Sheffield United in front of a crowd of 11,108 followed by an impressive 2,300 City fans. 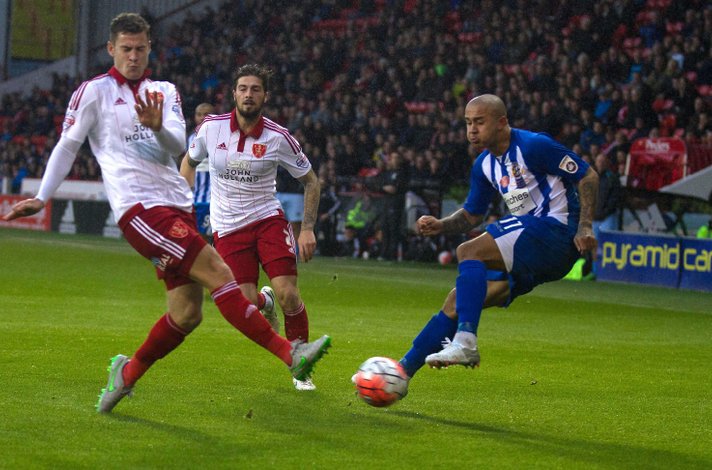 With the Trust continuing its efforts to bring the Club back to the City, Fans took to a protest at the game v FC United of Manchester which saw a crowd of 2,139 at Aggborough to help highlight the Clubs plight.

Our three Season stay at Aggborough came to an end as the Club continued its exile, moving to Bromsgrove Sporting. On the Pitch, we were relegated from the Vanarama Conference North but the Club dropped down three Leagues as the Board opted to resign from the League.

Planning Permission for a ground at Perdiswell which was originally refused was overturned but Worcester City Council made it clear they would never support Perdiswell.

In August 2018 Steve Goode became Chairman of the Club with WCFC Supporters Trust members joining him which led to a vote in February 2019 to pathe the way to allow Community Ownership of the Club. This was ratified by Shareholders in March 2019 and the Supporters Trust became majority shareholders making Worcester City FC a Supporter Owned Club.

The 2019/20 Season saw City (under manager Ashley Vincent) narrowly miss out on a place in the Quarter Finals of the FA Vase before the season was cut short by the COVID 19 virus.

After months of negotiations the City Council finally supported the Club returning to the City and to Claines Lane in Worcester. On Thursday 6th August 2020, we were finally in a position to announce the signing of a long term lease with the WFA to enable our return to Worcester starting from the 2020/21 season - (We will officially celebrate our return when the Covid 19 restrictions have been lifted).

In January 2021 Tim Harris was appointed as Team Manager following the departure of Ashley Vincent.

On 16th June 2021 our new club badge was launched. Worcester City FC is proud to have represented Worcester in the arena of sport for almost 120 years and to continue to do so. This change instils the football club’s commitment to the City of Worcester and its community.

We have a fantastic archive of photos and videos throughout our History, many displayed here on the website. To view these Albums visit:

and for more video visit: WCFCTV