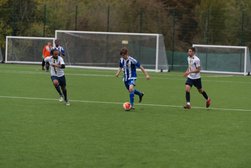 City Reserves back to winning ways

After the first defeat of the season last week, the Reserves were looking to get back into winning ways. Coach Andy Swatton said "Winning becomes a habit", and so as DSC Utd and Worcester City Reserves came out onto the Claines Lane 3G pitch, it was clear that the home team were looking to rediscover their form.

From the ref's whistle City pressed high. The visitors struggled to contain the momentum that the home team were building and within two minutes of the start, City went ahead when Armani Bennett coolly side footed the ball home off a rebound from the DSC keeper. 1-0. DSC were in shock as City began to dominate midfield exchanges, allowing the Reserves several goal scoring opportunities they seemed to decline. With possession and attacking menace squarely with City, as often happens in football, DSC took advantage of a break and put the ball in the home team's net. The striker was adjudged offside by the assistant referee and disallowed. City went back to peppering the visitor's goal as first Sam Jones then Harry Fletcher tested the visitor's goalkeeper. A free kick to DSC on the edge of the Reserves box, dipped menacingly targeting the underside of the crossbar perfectly; but Ben Clay, our top Goalkeeper, leapt up - salmon like - and tipped the ball over the bar saving the inevitable goal. (He was clearly looking for the 3rd clean sheet out of 5 Reserves' matches.) And so the half ended 1-0, perhaps the home side should have been further ahead, perhaps DSC earned just being one down through sheer tenacity and physicality.

The second half continued with the Reserves piling on the pressure, but DSC had other ideas; their defence looked stronger and they began to build some more scoring opportunities themselves. A lovely play down the right wing saw Zach Humphrys float in a cross field ball which tantalisingly hung in the air in the visitor's box deserving someone to get on it, but unfortunately it fell tamely and was successfully dealt with by DSC. The game entered a period of bad tempers and tired legs. But suddenly it got a lift when Daniel Adubofour eased the ball elegantly passed the DSC defenders leaving Alex Watts on goal. Alex calmly put it away to make it 2-0. When Harry Fletcher, full back, carefully curled the ball from the extreme left of the goal past the defenders and keeper it felt like game over 3-0. DSC crumbled and the final blow came from a clever assist from Kane Harold who put Armani Bennett through to snatch his brace 4-0. That's how it ended. FT.

City Reserves went back to the changing rooms knowing they had won 4 out of 5 games in the Midland Football League Division 4, with 3 clean sheets. It's a huge testament to this gifted group of young players that they have achieved so much this season, but let's also look at coaches Steve Humphrys and Andy Swatton who have organised and prepped the lads magnificently from the start of the season.

We'd like to wish our friends DSC Utd all the best for the rest of the season.